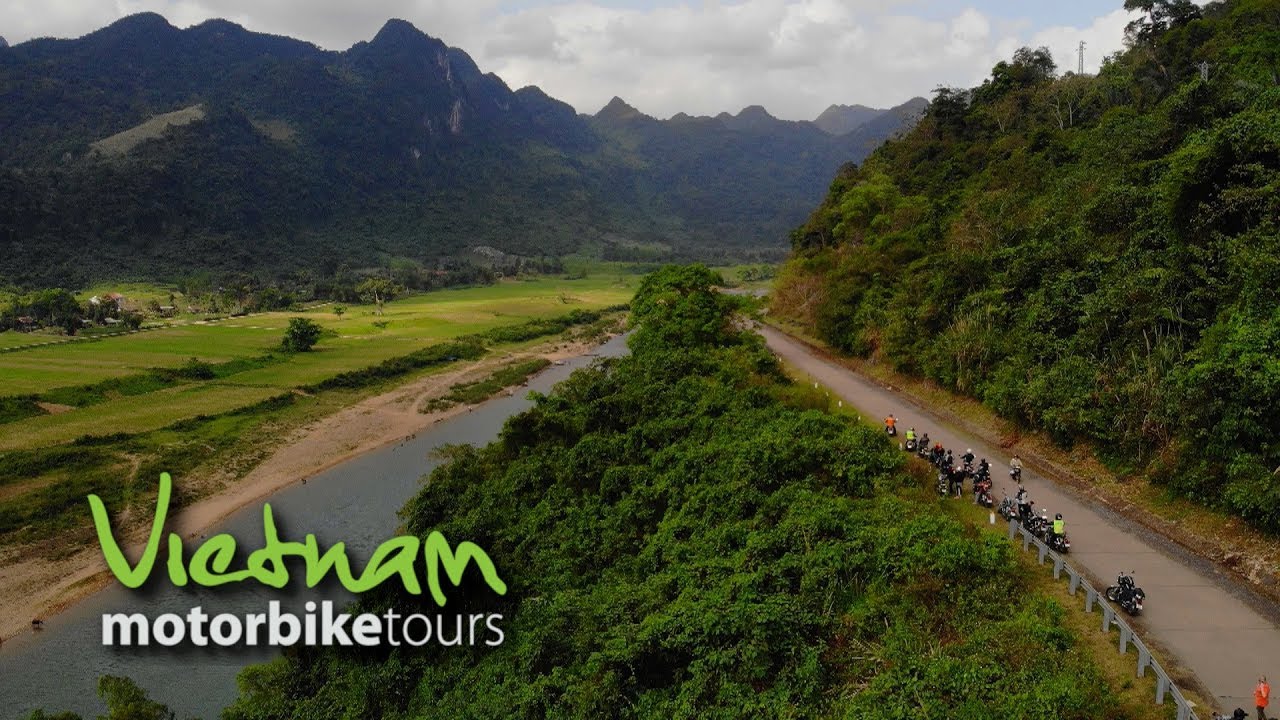 We are on day 3 of the top Gear tour with Vietnam Motorbike Tours, 10 days of pure bucket list riding. And today it’s the Ho Chi Minh trail, arguably the best riding of the trip with endless corners through epic mountain scenery. It’s time to see the real Vietnam! A misty morning in Khe Sanh, we head off to for fuel and to meet the locals. The Vietnamese love their soppy love songs so our guys indulge in a bit of early morning romance.
Helmet on, it’s time to see the real Vietnam and the Ho Chi Minh trail! Whether it’s a back road or the main highway, we often have to share the road with these guys. These characters usually spectate but sometimes hit the road too with Vietnam Motorbike Tours. In terms of pure riding enjoyment, today promises to be the best riding of the trip on the Ho Chi Minh trai. Even if we are still being stalked by this suspicious character. Vietnam Motorbike Tours is heading for the Western Ho Chi Minh Trail, a concrete-slab road that twists through misty mountains, thick jungle, blue rivers, and isolated ethnic minority hamlets. Countless corners, a grippy surface and barely any other traffic… it’s a rider’s dream come true. The Ho Chi Minh trail was a complex network of trails and roads built by the north Vietnamese to move men and equipment during the war. The USA later said it was one of the great achievements of military engineering of the 20th century”, because the trail was able to effectively supply troops despite the most intense bombing campaign in history, with bombs dropping on average every seven minutes along the trail.
The western Ho Chi Minh trail carved its way through very difficult terrain in one of the most remote areas. It was also the most heavily bombed part of the network.

Originally the Ho Chi Minh trail used existing foot tracks that had existed for centuries. Equipment was lugged on people’s backs, heavily loaded bicycles, or oxcarts. But as the war escalated the north Vietnamese rapidly developed road networks and fleets of trucks. Bases provided food, housing, medical care, and guides to the next way-station. In 1965, the Ho Chi Minh trail involved 24,000 men, six truck transportation battalions, two bicycle transportation battalions, a boat transportation battalion, eight engineer battalions, and 45 liaison stations. Everything was concealed by dense forest and also man-made camouflage. The concrete slab highway we are riding on is relatively recent. The western Ho Chi Minh trail is seen as an important part of Vietnam’s history so even though this road has very little traffic the government has spent a lot of money on a lasting quality road. And it’s all a massive bonus for Vietnam Motorbike Tours. It’s a rugged beautiful part of Vietnam and we stop regularly at places like this waterfall to soak it all in. All this cornering is hard work and builds up a big hunger. Time for Lunch.

Occasionally as we ride through villages it looks as though there’s money on the road. As a starving Youtube vlogger I’m very tempted to stop and grab handfuls of cash but I don’t want to drop behind the group too much. I finally found out at this brief stop when our Vietnam Motorbike Tours guides explained. Talking about our guides, our Vietnam Motorbike Tourssupport crew were incredibly helpful throughout the trip. Cooking lunch, running errands, making sure everyone was happy. And it went beyond supporting us, they would even support transport trucks up steep climbs. Mind you they are cheeky bastards too. Crazy sense of humour, little practical jokes, complete nutters. Mind you we gave as good as we got and Bao would often find someone had pulled his spark plug cap off as payback. Usual suspect? Toby Price no doubt. Let’s chat with the ladies and see how the trip is going so far.

So that was the western Ho Chi Minh trail. Later that night we tried to estimate how many corners we did, with guesses between a gazillion and a bazillion. And maybe seven straight bits. And all through some epic mountain scenery. Much of Vietnam has these limestone mountains that have eroded into these very distinctive shapes. It also tends to form caves and we’ll be checking out some of the incredible cave systems later with Vietnam Motorbike Tours.